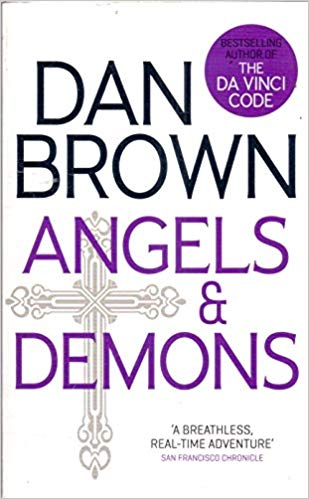 CERN Institute, Switzerland: a world-renowned scientist is found brutally murdered with a mysterious symbol seared onto his chest.

In a breathtaking race against time, Harvard professor Robert Langdon must decipher a labyrinthine trail of ancient symbols if he is to defeat those responsible – the Illuminati, a secret brotherhood presumed extinct for nearly four hundred years, reborn to continue their deadly vendetta against their most hated enemy, the Catholic Church.

When world-renowned Harvard symbologist Robert Langdon is summoned to a Swiss research facility to analyze a mysterious symbol — seared into the chest of a murdered physicist — he discovers evidence of the unimaginable: the resurgence of an ancient secret brotherhood known as the Illuminati… the most powerful underground organization ever to walk the earth. The Illuminati has surfaced from the shadows to carry out the final phase of its legendary vendetta against its most hated enemy… the Catholic Church.

Langdon’s worst fears are confirmed on the eve of the Vatican’s holy conclave, when a messenger of the Illuminati announces he has hidden an unstoppable time bomb at the very heart of Vatican City. With the countdown under way, Langdon jets to Rome to join forces with Vittoria Vetra, a beautiful and mysterious Italian scientist, to assist the Vatican in a desperate bid for survival.

Embarking on a frantic hunt through sealed crypts, dangerous catacombs, deserted cathedrals, and even to the heart of the most secretive vault on earth, Langdon and Vetra follow a 400-year old trail of ancient symbols that snakes across Rome toward the long-forgotten Illuminati lair… a secret location that contains the only hope for Vatican salvation.

An explosive international thriller, Angels & Demons careens from enlightening epiphanies to dark truths as the battle between science and religion turns to war.

The Sky is Falling

Master of the Game