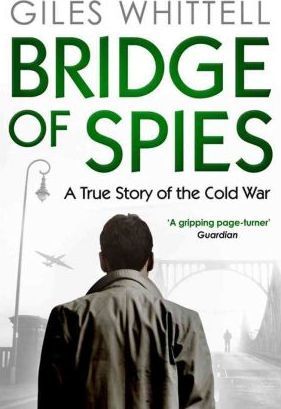 Who were the three men the Soviet and American superpowers exchanged on Berlin’s Glienicke Bridge on February 10, 1962, in the most legendary prisoner exchange between East and West? ‘Bridge of Spies’ vividly traces the journeys of these men, whose fate defines the complex conflicts that embodied the years of the Cold War.

Bridge of Spies by Giles Whittell

THE DRAMATIC EVENTS BEHIND THE FILM BRIDGE OF SPIES.
‘Riveting, meticulously researched and beautifully written, Bridge of Spies unlocks one of the most fascinating espionage mysteries of the Cold War’ – Ben Macintyre, author of Agent Zigzag and SAS Rogue Heroes

Bridge of Spies is a gripping, entertaining, hair-raising and comical story, which moves effortlessly from the hardware of high-flying planes and new missiles to the geopolitics of the nuclear stand-off and through the poignant personal stories of its central protagonists: Powers, the all-American hero, blacklisted for not having killed himself on his descent to earth; a KGB spy who has spent aimless and lonely years achieving nothing in the US; and the opposing leaders Khrushchev and Eisenhower, both trapped in a spiral of confrontation neither wants.

Telling the true story that inspired Le Carre’s famous scene, Bridge of Spies is a brilliant take on the absurdity and heroism of the Cold War days that will appeal to a new generation of readers unfamiliar with the history but drawn in by the compelling and vividly recreated narrative.

You Are a Badass : How to Stop Doubting Your Greatness and Start Living an Awesome Life: Embrace self care with one of the world’s most fun self help books