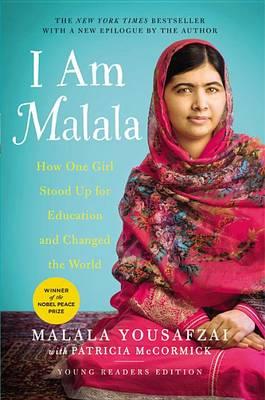 The bestselling memoir by Nobel Peace Prize winner Malala Yousafzai. I Am Malala. This is my story.
Malala Yousafzai was only ten years old when the Taliban took control of her region. They said music was a crime. They said women weren’t allowed to go to the market. They said girls couldn’t go to school.
Raised in a once-peaceful area of Pakistan transformed by terrorism, Malala was taught to stand up for what she believes. So she fought for her right to be educated. And on October 9, 2012, she nearly lost her life for the cause: She was shot point-blank while riding the bus on her way home from school.
No one expected her to survive.

I Am Malala : How One Girl Stood Up for Education and Changed the World (Young Readers Edition)

I come from a country that was created at midnight. When I almost died it was just after midday.

When the Taliban took control of the Swat Valley in Pakistan, one girl spoke out. Malala Yousafzai refused to be silenced and fought for her right to an education.

On Tuesday, October 9, 2012, when she was fifteen, she almost paid the ultimate price. She was shot in the head at point-blank range while riding the bus home from school, and few expected her to survive.

Instead, Malala’s miraculous recovery has taken her on an extraordinary journey from a remote valley in northern Pakistan to the halls of the United Nations in New York. At sixteen, she has become a global symbol of peaceful protest and the youngest-ever Nobel Peace Prize laureate.

I Am Malala is the remarkable tale of a family uprooted by global terrorism, of the fight for girls’ education, of a father who, himself a school owner, championed and encouraged his daughter to write and attend school, and of brave parents who have a fierce love for their daughter in a society that prizes sons.

Cracking the Da Vinci Code : The Unauthorized Guide To The Facts Behind The Fiction

Sapiens : A Brief History of Humankind