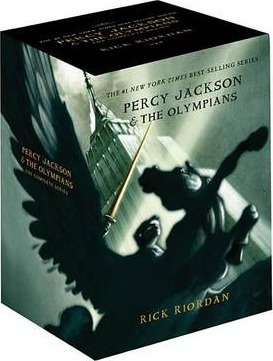 By
Rick Riordan
Paperback
Percy Jackson and the Olympians

All five books in the blockbuster Percy Jackson and the Olympians series, in paperback, have been collected in a boxed set fit for demigods. This value-priced set includes the best-selling The Lightning Thief, The Sea of Monsters, The Titan’s Curse, The Battle of the Labyrinth, and The Last Olympian. Whether it is for readers who are experiencing Percy’s thrilling adventures with Greek gods and monsters for the first time, or for fans who want to devour the saga again, this gift will be prized by young and old.

Percy Jackson & the Olympians All Books

This box set contains all 5 books of Percy Jackson and the Olympians series
1. The Lightning Thief
2. The Sea of Monsters
3. The Titan’s Curse
4. The Battle of the Labyrinth
5. The Last Olympian