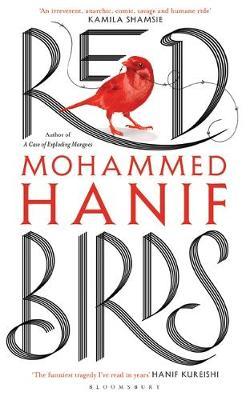 An American pilot crash lands in the desert and takes refuge in the very camp he was supposed to bomb. Hallucinating palm trees and worrying about dehydrating to death isn’t what Major Ellie expected from this mission. Still, it’s an improvement on the constant squabbles with his wife back home.

In the camp, teenager Momo’s money-making schemes are failing. His brother left for his first day at work and never returned, his parents are at each other’s throats, his dog is having a very bad day, and an aid worker has shown up wanting to research him for her book on the Teenage Muslim Mind.

Written with his trademark wit, keen eye for absurdity and telling important truths about the world today, Red Birds reveals master storyteller Mohammed Hanif at the height of his powers.

An American pilot crash lands in the desert, unprepared for any situation that can’t be resolved with the After Eight mints in his survival kit. Hallucinating palm trees and dehydrating isn’t Major Ellie’s idea of a good time, but he figures it’s less of a hassle than another marital spat back home. In a neighbouring refugee camp, Momo has his own problems; his money-making schemes aren’t working out as planned, his dog has ideas above his station and an academic researcher has shown up to study him for her thesis on the Teenage Muslim Mind. And then there’s the matter of his missing brother…