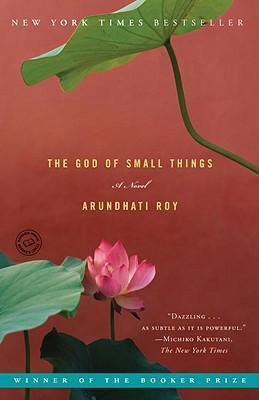 The God of Small Things

Compared favorably to the works of Faulkner and Dickens, Arundhati Roy’s debut novel is a modern classic that has been read and loved worldwide. Equal parts powerful family saga, forbidden love story, and piercing political drama, it is the story of an affluent Indian family forever changed by one fateful day in 1969.

The God of Small Things

The seven-year-old twins Estha and Rahel see their world shaken irrevokably by the arrival of their beautiful young cousin, Sophie. It is an event that will lead to an illicit liaison and tragedies accidental and intentional, exposing “big things [that] lurk unsaid” in a country drifting dangerously toward unrest. Lush, lyrical, and unnerving, The God of Small Things is an award-winning landmark that started for its author an esteemed career of fiction and political commentary that continues unabated.

The year is 1969. In the state of Kerala, on the southernmost tip of India, a skyblue Plymouth with chrome tailfins is stranded on the highway amid a Marxist workers’ demonstration. Inside the car sit two-egg twins Rahel and Esthappen, and so begins their tale…. Armed only with the invincible innocence of children, they fashion a childhood for themselves in the shade of the wreck that is their family – their lonely, lovely mother, Ammu (who loves by night the man her children love by day), their blind grandmother, Mammachi (who plays Handel on her violin), their beloved uncle Chacko (Rhodes scholar, pickle baron, radical Marxist, bottom-pincher), their enemy, Baby Kochamma (ex-nun and incumbent grandaunt), and the ghost of an imperial entomologist’s moth (with unusually dense dorsal tufts). When their English cousin, Sophie Mol, and her mother, Margaret Kochamma, arrive on a Christmas visit, Esthappen and Rahel learn that Things Can Change in a Day. That lives can twist into new, ugly shapes, even cease forever, beside their river “graygreen. With fish in it. With the sky and trees in it. And at night, the broken yellow moon in it.”