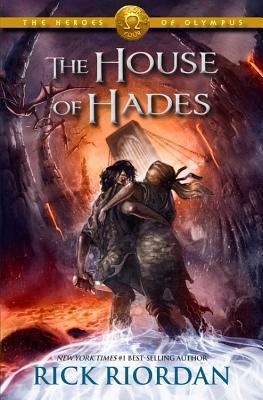 The House of Hades (The Heroes of Olympus #4)

At the conclusion of The Mark of Athena, Annabeth and Percy tumble into a pit leading straight to the Underworld. The other five demigods have to put aside their grief and follow Percy’s instructions to find the mortal side of the Doors of Death. If they can fight their way through the Gaea’s forces, and Percy and Annabeth can survive the House of Hades, then the Seven will be able to seal the Doors from both sides and prevent the giants from raising Gaea. But, Leo wonders, if the Doors are sealed, how will Percy and Annabeth be able to escape? They have no choice. If the demigods don’t succeed, Gaea’s armies will never die. They have no time. In about a month, the Romans will march on Camp Half-Blood. The stakes are higher than ever in this adventure that dives into the depths of Tartarus.

The House of Hades (The Heroes of Olympus #4)

Hazel stands at a crossroads. She and the remaining crew of the Argo II could return home with the Athena Parthenos statue and try to stop Camp Half-Blood and Camp Jupiter from going to war. Or they could continue their quest to find the House of Hades, where they might be able to open the Doors of Death, rescue their friends Percy and Annabeth from Tartarus, and prevent monsters from being reincarnated in the mortal world. Whichever road they decide to take, they have to hurry, because time is running out. Gaea, the bloodthirsty Earth Mother, has set the date of August 1 for her rise to power.

Annabeth and Percy are overwhelmed. How will the two of them make it through Tartarus? Starving, thirsty, and in pain, they are barely able to stumble on in the dark and poisonous landscape that holds new horrors at every turn. They have no way of locating the Doors of Death. Even if they did, a legion of Gaea’s strongest monsters guards the Doors on the Tartarus side. Annabeth and Percy can’t exactly launch a frontal assault.

Despite the terrible odds, Hazel, Annabeth, Percy, and the other demigods of the prophecy know that there is only one choice: to attempt the impossible. Not just for themselves, but for everyone they love. Even though love can be the riskiest choice of all.

Join the demigods as they face their biggest challenges yet in The House of Hades, the hair-raising penultimate book in the best-selling Heroes of Olympus series.