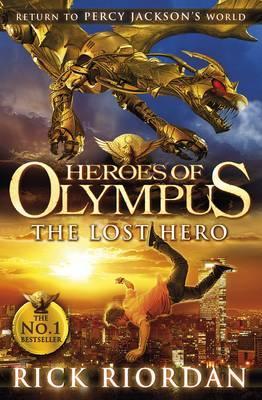 The Number one, bestselling title in this new spin-off series from Percy Jackson creator, Rick Riordan.

When Jason, Piper and Leo crash land at Camp Half-Blood, they have no idea what to expect. Apparently this is the only safe place for children of the Greek Gods – despite the monsters roaming the woods and demigods practising archery with flaming arrows and explosives. But rumours of a terrible curse – and a missing hero – are flying around camp. It seems Jason, Piper and Leo are the chosen ones to embark on a terrifying new quest, which they must complete by the winter solstice. In just four days time. Can the trio succeed on this deadly mission – and what must they sacrifice in order to survive?

Jason has a problem. He doesn’t remember anything before waking up on a school bus holding hands with a girl. Apparently she’s his girlfriend Piper, his best friend is a kid named Leo, and they’re all students in the Wilderness School, a boarding school for “bad kids.” What he did to end up here, Jason has no idea—except that everything seems very wrong.

Piper has a secret. Her father has been missing for three days, and her vivid nightmares reveal that he’s in terrible danger. Now her boyfriend doesn’t recognize her, and when a freak storm and strange creatures attack during a school field trip, she, Jason, and Leo are whisked away to someplace called Camp Half-Blood. What is going on?

Leo has a way with tools. His new cabin at Camp Half-Blood is filled with them. Seriously, the place beats Wilderness School hands down, with its weapons training, monsters, and fine-looking girls. What’s troubling is the curse everyone keeps talking about, and that a camper’s gone missing. Weirdest of all, his bunkmates insist they are all—including Leo—related to a god.

Heroes of Olympus books collection by Rick Riordian is now available in amazing prices with cash on delivery across Pakistan. The Heroes of Olympus is a pentalogy of fantasy-adventure novels written by American author Rick Riordan. The novels detail a conflict between Greek and Roman demigods and Gaea, the earth goddess. The series is a sequel to Percy Jackson & the Olympians, which dealt with Greek gods.

The Books in collection: