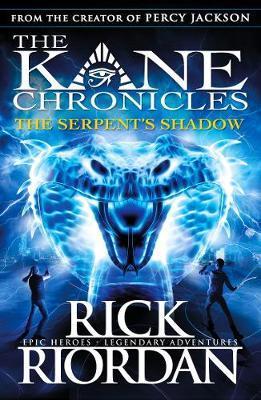 He’s b-a-a-ack! Despite their best efforts, Carter and Sadie Kane can’t seem to keep Apophis, the chaos snake, down. Now Apophis is threatening to plunge the world into eternal darkness, and the Kanes are faced with the impossible task of having to destroy him once and for all. Unfortunately, the magicians of the House of Life are on the brink of civil war, the gods are divided, and the young initiates of Brooklyn House stand almost alone against the forces of chaos.

The Kane Chronicles: The Serpent’s Shadow is the final thrilling instalment in award-winning author and Percy Jackson creator Rick Riordan’s Kane Chronicles trilogy. Is their inherited magic enough to battle against the most powerful mythical forces that Egypt’s gods have to throw at them?

CARTER AND SADIE KANE, descendants of the magical House of Life, are in pretty big trouble.

Despite their bravest efforts, Apophis, the giant snake of Chaos, is still threatening to plunge the world into eternal darkness. Now the Kanes must do something no magician has ever managed – defeat Apophis himself. No pressure there then.

Battling against the forces of Chaos, their only hope is an ancient spell – but the magic has been lost for a millennia. Will they find the serpent’s shadow, or will they be led to their deaths in the depths of the Underworld?

Praise for The Kane Chronicles: The Serpent’s Shadow:

‘Storytelling that will get readers hooked’ – Philip Ardagh, The Guardian

Rick Riordan is the award-winning writer of the Percy Jackson series, The Kane Chronicles and the Heroes of Olympus series. He lives in San Antonio, Texas, with his wife and two sons. Percy Jackson and the Lightning Thief was the overall winner of the Red House Children’s Book Award in 2006, and made into a blockbuster film starring Sean Bean, Pierce Brosnan and Uma Thurman in 2010. The series has gone on to become a chart-topping success.

***Check out The Kane Chronicles website at www.kanechronicles.co.uk for games, puzzles, author interviews and much more.***