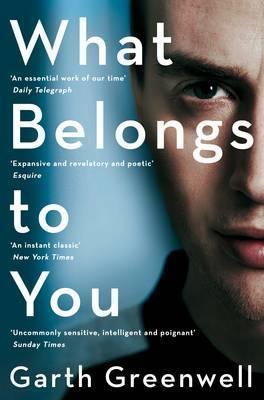 What Belongs to You

On an unseasonably warm autumn day, an American teacher enters a public bathroom beneath Sofia’s National Palace of Culture. There he meets Mitko, a charismatic young hustler, and pays him for sex. He returns to Mitko again and again over the next few months, drawn by hunger and loneliness and risk, and finds himself ensnared in a relationship in which lust leads to mutual predation, and tenderness can transform into violence.

On an unseasonably warm autumn day, an American teacher walks down a staircase beneath Sofia’s National Palace of Culture, looking for sex. Among the stalls of a public bathroom he encounters Mitko, a charismatic young hustler. He returns to Mitko again and again over the next few months, and their trysts grow increasingly intimate and unnerving as the enigma of this young man becomes inseparable from that of his homeland, Bulgaria, a country with a difficult past and an uncertain future.

Garth Greenwell’s What Belongs to You is a stunning debut about an American expat struggling with his own complicated inheritance while navigating a foreign culture. Lyrical and intense, it tells the story of a man caught between longing and resentment, unable to separate desire from danger, and faced with the impossibility of understanding those he most longs to know.