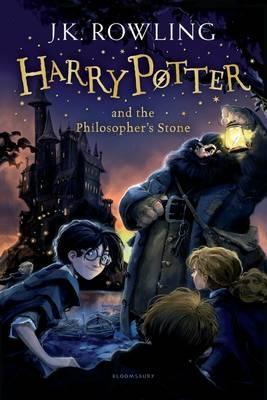 When mysterious letters start arriving on his doorstep, Harry Potter has never heard of Hogwarts School of Witchcraft and Wizardry.

They are swiftly confiscated by his aunt and uncle.

Then, on Harry’s eleventh birthday, a strange man bursts in with some important news: Harry Potter is a wizard and has been awarded a place to study at Hogwarts.

And so the first of the Harry Potter adventures is set to begin.

You Save: ₨ 100
In Stock
Facebook Twitter Google+ LinkedIn
Someone from Islamabad and 1 other bought this item recently.
Categories: Children, Fantasy, Fiction ISBN: 9781408855652 Tag: harrypotter2014

When a letter arrives for unhappy but ordinary Harry Potter, a decade-old secret is revealed to him that apparently he’s the last to know. His parents were wizards, killed by a Dark Lord’s curse when Harry was just a baby, and which he somehow survived. Leaving his unsympathetic aunt and uncle for Hogwarts School of Witchcraft and Wizardry, Harry stumbles upon a sinister mystery when he finds a three-headed dog guarding a room on the third floor. Then he hears of a missing stone with astonishing powers, which could be valuable, dangerous – or both. An incredible adventure is about to begin!

These new editions of the classic and internationally bestselling, multi-award-winning series feature instantly pick-up-able new jackets by Jonny Duddle, with huge child appeal, to bring Harry Potter to the next generation of readers. It’s time to PASS THE MAGIC ON …