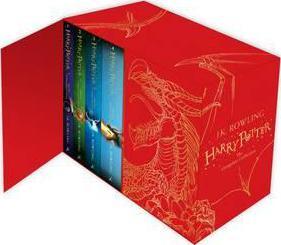 These new editions of the classic and internationally bestselling, multi-award-winning series feature instantly pick-up-able new jackets by Jonny Duddle, with huge child appeal, to bring Harry Potter to the next generation of readers. It’s time to PASS THE MAGIC ON …

Now for the first time ever, J.K. Rowling’s seven bestselling Harry Potter books are available in a stunning paperback boxed set! The Harry Potter series has been hailed as “one for the ages” by Stephen King and “a spellbinding saga’ by USA Today. And most recently, The New York Times called Harry Potter and the Deathly Hallows the “fastest selling book in history.” This is the ultimate Harry Potter collection for Harry Potter fans of all ages!