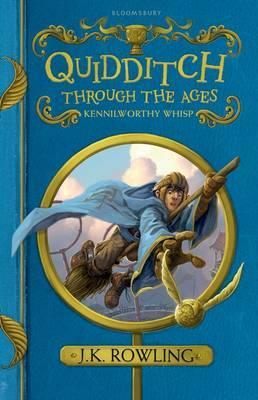 Quidditch Through the Ages

If you have ever asked yourself where the Golden Snitch came from, how the Bludgers came into existence, or why the Wigtown Wanderers have pictures of meat cleavers on their robes, you need Quidditch Through the Ages. This limited edition is a copy of the volume in Hogwarts School Library, where it is consulted by young Quidditch fans on an almost daily basis. Proceeds from the sale of this book will go to improving and saving the lives of children around the world – work that is even more important and astonishing than the three-and-a-half-second capture of the Golden Snitch by Roderick Plumpton in 1921.
– Albus Dumbledore

A perennial bestseller in the wizarding world and one of the most popular books in the Hogwarts School library, Quidditch Through the Ages contains all you will ever need to know about the history, the rules – and the breaking of the rules – of the noble sport of Quidditch. Packed with fascinating facts, this definitive guide by the esteemed Quidditch writer Kennilworthy Whisp charts the game’s history from its early origins in the medieval mists on Queerditch Marsh, through to the modern-day sport loved by so many wizard and Muggle families around the world. With comprehensive coverage of famous Quidditch teams, the commonest fouls, the development of racing brooms, and much more, this is a must-have sporting bible for all Harry Potter fans, Quidditch lovers and players, whether the weekend amateur or the seasoned Chudley Cannons season-ticket holder.

This brand new edition of the most famous sports book in the wizarding world pairs J.K. Rowling’s original text, with gorgeous jacket art by Jonny Duddle and line illustrations throughout by Tomislav Tomic. A contribution from the sale of each book will go to Comic Relief.