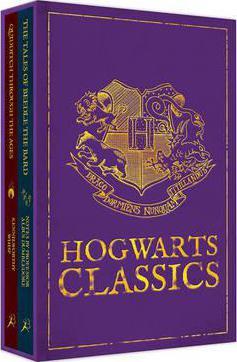 This beautiful box set contains hardback copies of The Tales of Beedle the Bard and Quidditch Through the Ages.

The Hogwarts Classics box set contains two essential wizarding works no Muggle home should be without. Regularly consulted by students at Hogwarts School of Witchcraft and Wizardry, Quidditch Through the Ages is an indispensable and comprehensive guide to the popular wizarding sport. The Tales of Beedle the Bard is a collection of five fairy tales loved by generations of wizarding families, accompanied by wise, witty and learned notes from the esteemed Professor Albus Dumbledore. Both titles include illustrations from J.K. Rowling.

A handsome addition to any magical library, these gorgeous, hardback gift editions of two magical classics from J.K. Rowling’s wizarding world come in an irresistible slipcase, and make the perfect gift for any seeker of learning, Muggle or wizard.