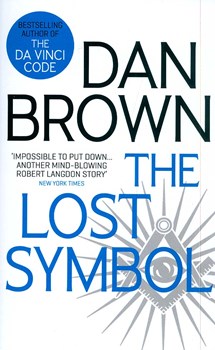 In this stunning follow-up to the global phenomenon The Da Vinci Code, Dan Brown demonstrates once again why he is the world’s most popular thriller writer. The Lost Symbol is a masterstroke of storytelling – a deadly race through a real-world labyrinth of codes, secrets, and unseen truths…all under the watchful eye of Brown’s most terrifying villain to date. Set within the hidden chambers, tunnels, and temples of Washington, DC., The Lost Symbol accelerates through a startling landscape toward an unthinkable finale.

The Capitol Building, Washington DC: Harvard symbologist Robert Langdon believes he is here to give a lecture. He is wrong. Within minutes of his arrival, a shocking object is discovered. It is a gruesome invitation into an ancient world of hidden wisdom.

When Langdon’s mentor, Peter Solomon – prominent mason and philanthropist – is kidnapped, Langdon realizes that his only hope of saving his friend’s life is to accept this mysterious summons.

It is to take him on a breathless chase through Washington’s dark history. All that was familiar is changed into a shadowy, mythical world in which Masonic secrets and never-before-seen revelations seem to be leading him to a single impossible and inconceivable truth.

The Sands of Time